Coronavirus (Covid-19) and the map: How regional differences shape the geography of the pandemic 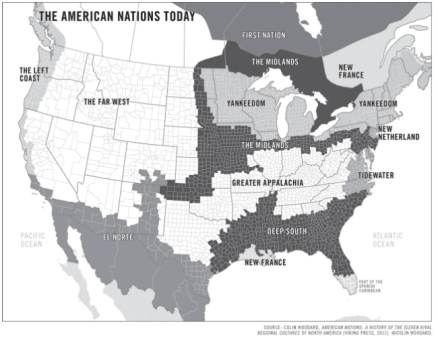 “As the coronavirus surges across the southern United States, Americans are once again seeing the profound effects of centuries-old regional differences in attitudes toward individual liberty, the common good, and the possibility or even desirability of competent, technocratic governance,” Colin Woodard writes for The Lewiston Sun-Journal. “Those differences -– and the abdication of federal leadership by President Trump –- have turned the United States into ground zero for the pandemic, a country Canada, the European Union and other countries are now trying to quarantine themselves away from. Distinct regional cultures make up the United States, cultures originating in the differences between the different Euro-American colonial projects on the eastern and southwestern rims of what is now the United States and the mutually exclusive swaths of the country their descendants first colonized. The cultures –- described in my 2011 book, ‘American Nations: A History of the Eleven Rival Regional Cultures of North America’ –- don’t respect state or even international boundaries, and their enduring effect on history, social attitudes, elections, and public health can only be seen at the county level. A detailed analysis of the regional variations in new case trends, using a county-level COVID-19 data set painstakingly assembled, updated and shared with the public by The New York Times, maps precisely to what ‘American Nations’ would predict.The fundamental philosophical divide between these regional cultures is over the question of how best to organize American society.” Colin Woodard, “How the geography of the pandemic is determined by centuries-old regional differences,” The Lewiston Sun-Journal.