Coronavirus (Covid-19) and the vaccine: If you are in New York, can you get it? 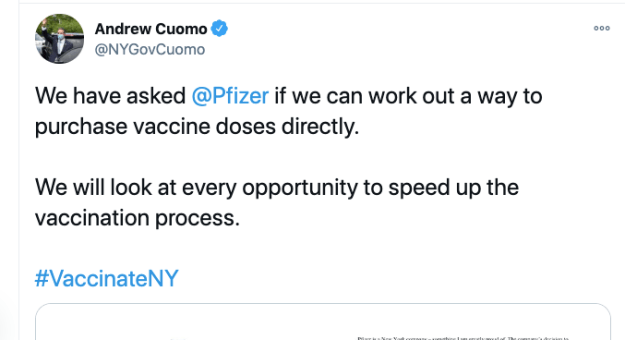 The continued struggle to find a place to get the coronavirus vaccine in New York is causing a great deal of anxiety, mirrored by the anxiety of people in other states.

I got the first dose of Moderna on Saturday at Jacobi Medical Center in the Bronx. I have been following others’ struggles.

A friend called today and said she had joined her 87-year-old mother on a trip to Walton High School, 2780 Reservoir Ave., in the Bronx. She got an appointment last week, booked for her on the New York City site by a 25-year-old niece who lives in New York City, my friend said. The process was straightforward and quick.

But this week, the New York City vaccinepod site will allow only people who live and work in New York City to book appointments in the city. I went through the entire process, and it is rejecting me. (I live in Westchester, and qualify for vaccine because I am 66 years old.)

My friend told me of a couple who live in Westchester: He works in the city and is eligible, but she does not and is not eligible.

New York City sites will also vaccinate essential workers who live outside of the city but do essential jobs in the city. Mayor Bill de Blasio has told all others to stay away. People signing up have to sign an attestation that their address and occupation and age data are accurate, according to this New York Times story, and lying by using a fake address or anything else would be a misdemeanor.

The New York State site is showing availability to be severely limited through April 16. Here’s the list, in the screenshot below. You’ll need to drive to Potsdam or Plattsburgh or Utica or Johnson City to get the vaccine.

Two of the New York State sites are in New York City — at the Javits Center and at Aqueduct Racetrack in South Ozone Park — but neither of them has appointments until after April 16, according to this listing.

There may be other smaller places that are still delivering vaccines, but they’re not listed on the state site.

The problem seems to be mainly one of supply. The supplies the federal government is delivering to the states have been less than promised, and so people are waiting. Gov. Andrew Cuomo Tweeted today that he is asking one of the manufacturers, Pfizer, if New York State can buy direct, instead of waiting on the federal supplies. 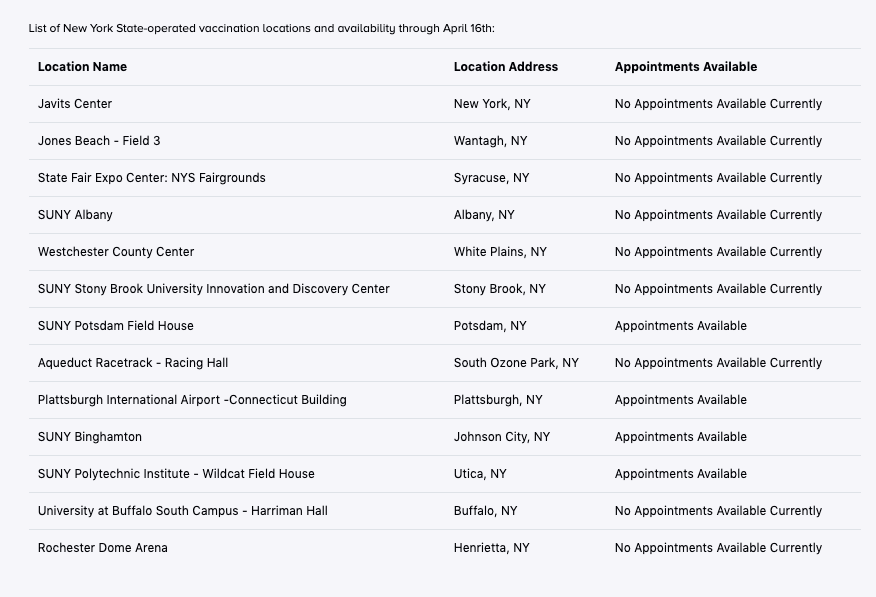