We have heard a lot of questions and a lot of anguish lately about facility fees, which are charged by hospitals and other institutions for the use of their, well, facilities. Here’s a roundup of what we know about this topic.

What is a facility fee?

Hospitals often charge a facility fee on top of a doctor’s fee or a fee for performing a service.

Federal law allows hospitals to charge facility fees for outpatient services at affiliated clinics, even if they’re not near a hospital. The clinics  may look just like a private practice, but the fact that they’re affiliated with a hospital means they can charge that extra fee.

We have heard of people who went to the same clinic for a visit a year apart, and the second visit incurred a facility fee because the clinic had been acquired by a hospital.

How will I know that I am being charged a facility fee?

Can you give me some examples?

A woman in New Orleans named Nancy DuBois had a sore shoulder. She went to a sports medicine clinic and got a diagnosis of “frozen shoulder.” She paid a doctor bill, and a co-pay, but later also received a bill of $1,434.01 for a “facility fee.” She was responsible for $137.

My girlfriend’s took place at a GI center, not her doctor’s office, and the biggest line item on the bill was $2,700, for the facility fee, of which the insurer paid a bit less than half. She was not asked to pay the balance.

Do I have to pay? Can I just refuse? Or appeal?

We don’t make recommendations about not paying. We do have a “how to argue a bill” post.

(Update April 2019: Here’s a reader who successfully argued for a repeal of more than $300 in facility fees.)

Why is this happening? I mean, didn’t I pay the doctor and the lab fees? So what is this extra big chunk of money?

The facility fee increases cash flow for the hospital. It makes them more money. It also serves as an incentive for hospitals to buy smaller practices. Read more here.

Will my insurance company pay?

So it pays to ask up front, “Is there a facility fee? How much is that? Is it covered by my insurance? Does there have to be a facility fee?” When we survey providers to collect prices, we learned that some places would quote us only a facility fee, adding that the doctor fees varied by provider, and so did the anesthesiology fees. Most places said labs were extra and unpredictable.

Medicare also will pay more. “Medicare pays twice as much for office visits at hospital-owned clinics as compared to private physician practices, according to 2012 and 2014 reports by the Medicare Payment Advisory Commission (MEDPAC), an agency that advises Congress on Medicare spending issues,” wrote Dr. Niran Al-Agba on The Health Care blog. “For example, Medicare paid $453 for an echocardiogram at hospital-owned facilities, yet the same test performed at a privately owned offices cost $189, according to the 2014 report. In its 2012 report, MEDPAC found Medicare paid $124.40 for a 15-minute visit at a hospital-based practice compared to $68.97 at a private practice — an 80 percent difference.”

How should I protect myself?

We advise people to always ask prices in advance.

Some people prefer not to use hospital-based providers, and seek to avoid facility fees that way. This can be tricky, though: as mentioned before, sometimes a clinic has been acquired by a hospital and begins to charge a facility fee.

Here’s our handy list of questions to ask before a colonoscopy; it could be adapted to any procedure.

How much are facility fees?

They vary widely. This is a graphic from a non-hospital gastroenterology center suggesting the range of prices. Consider the source, though; the gastro center charge might be $0 as it was in my example. 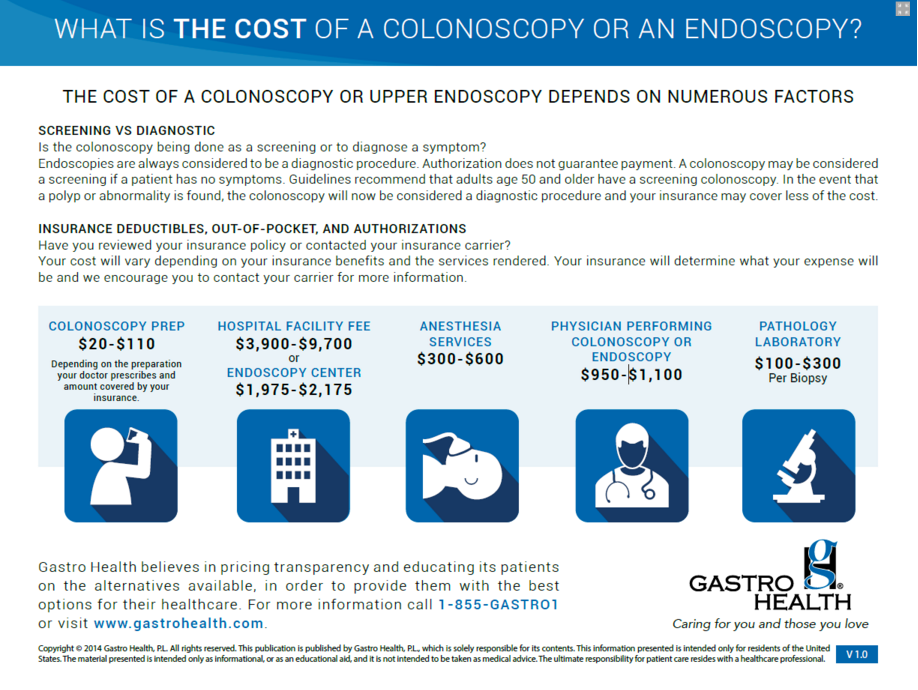 How do providers defend these fees?

In our partnership in New Orleans, our partners Jed Lipinski at NOLA.com I The Times-Picayune and Lee Zurik at WVUE Fox 8 Live news added to our knowledge.

“We are committed to transparency for our patients and community. We encourage patients to call 504-702-2081 to discuss any financial questions or request a detailed bill. Residents of Louisiana may also be eligible for Financial Assistance. Patients can contact our Financial Counseling office at 504-702-3500 for additional information.”

In the course of our reporting, an insider at a New Orleans medical institution sent us a chart that was described as several years old, on the condition that we not name the insider or the institution, reflecting how the doctor’s fee and the facility fee relate to each other for a series of common office visits. We think this is out of date; the same institution had fees upward of $1,000 in examples we saw. Click on the chart to see the details. 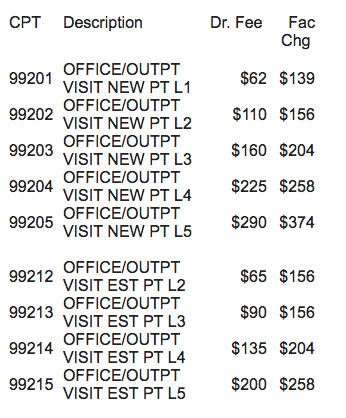 Tulane University Medical Center was cited in our partners’ reporting as the source of the hefty facility fee for a woman who went to a sports medicine clinic affiliated with Tulane. Tulane, of course, is owned by the HCA Healthcare chain, a giant U.S. for-profit group.

“Tulane Institute of Sports Medicine is a hospital outpatient clinic owned and operated by Tulane Medical Center. The physicians who treat patients at Tulane Institute of Sports Medicine are employed by Tulane University Medical Group. Therefore, patients may receive two separate bills for each clinic visit. The physician statement is from Tulane University Medical Group and covers the fees for the physician who provided treatment. The facility statement is from Tulane University Hospital & Clinic (the legal name for Tulane Medical Center), and this statement covers the fees for the use of the facility, supplies and staff services. The charges added together represent the total charge for each clinic visit.”

How do non-hospital doctors feel about this?

Dr. Brobson Lutz,a private practice physician in New Orleans and former city health director under three successive mayors, runs a private practice from a New Orleans shotgun house in the shadows of Ochsner Baptist, one of the several hospitals in the Ochsner hospital chain. Here are some things he said to our   Jed Lipinski in his interview.

“Independent primary care clinics are just as well equipped and staffed as primary care facilities inside a hospital. In many cases, they’re better equipped. And yet you’re still paying more for the one in the hospital.”

“These neighborhood clinics, like Tulane Institute of Sports Medicine, have essentially the same operating expenses as my private practice. And yet they get a facility fee because they’re affiliated with a hospital. That’s not only unfair to the patient, it’s unfair to the primary care physician.”

Why is it unfair to them?

“Because the cost of running a private practice keeps increasing, while reimbursement rates from insurance companies have leveled out. It’s hard to maintain good employees for the reimbursement rates we get. For example, I recently dropped out of Humana’s network because they were reimbursing me less than 80 percent of Medicare, whereas they were reimbursing Ochsner more than 120 percent of Medicare. And yet those hospitals are charging facility fees on top of it and just minting money.”

What do you think about Nancy Dubois receiving a facility fee for her visit?

“I think she’s been fleeced. She may have had shoulder pain on the way in, but she got pick-pocketed on the way out.”

How did facility fees come about?

“I suspect that, like many things in medicine, there was originally a reason for charging facility fees. It was more expensive to see patients in certain situations. But in medicine as in other things in life, when you roll off into the trenches, the charlatans start taking advantage of it. That’s what’s happened with facility fees.”

This all seems like a bad idea. How do insiders feel about this when they’re not being quoted by name?

We got this from an anonymous person who was responding to our facility fee reporting.

“A professional can only bill for the professional component i.e. interpretation either in or out of the hospital. In cardiology e.g. the credentialed cardiologists read all of the ECG’s, including their own and bill accordingly. The government allows a facility fee if done in a hospital as an outpatient. If inpatient for a federal patient it is billed according to the diagnosis global reimbursement i.e DRG. Some cardiologists will contract for an entity to bring in equipment and that company bills the technical fee and the MD bills the reading. My understanding is that since this is not a hospital setting there is no facility fee. There was an article in the Globe about 10 years ago of a patient whose derm bill went from 150 to 600 because the dermatologist had become employed by the hospital and hence a facility fee was added in. The response below is corporate BS and minimizes the money grabbing and patient stealing done by the large systems. The hospital industry lobby is probably why La still has balance billing. ER , hospital medicine, surgery centers, endoscopy centers are all skirting the intent of the law to reign in costs. The freestanding ER’s surgery centers, endoscopy, centers, cataract mills are all partnership arrangements to capture facility fees where some of that kicks back to the ‘providers.’

“For now everybody wins, but it is monkey see monkey do and if balance billing is done away with they will fold like a cheap tent. Keep digging it is time for this all to be exposed.”