A reader’s victory on facility fees: She saved more than $300, or how to argue a bill 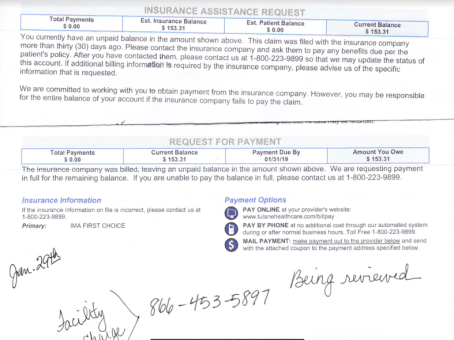 A comment came in on one of our “facility fee” posts, explaining this mysterious charge, imposed by hospitals on top of a bill for medical treatment if a patient visits one of their facilities: “As of today, Jan. 30, 2019, this is still happening at Tulane Sports. I received a bill for $153.00 facility fee. There were no other charges on the bill, only the facility fee. I had no idea what it was for until I made calls and found this blog. It is unfair and ridiculous. The doctor billed less for the 15 minute appointment.”

I queried her about it, and she told us after a few weeks: “Final result – Tulane has removed all facility fees from both of my bills. There was no explanation or apology, other than the code assigned was not billable. I encourage anyone who has a facility fee bill or a facility fee as a line item on a bill with other charges, to continue to call and question the reason for the charge. It was a frustrating process with Tulane, but persistence paid off.”

I asked her to tell us what happened, and here is her explanation:

“Below is a summary of what I experienced. My first visit was in July 2018, so it’s difficult to remember all of the details. If you want clarification on any of my claims, please let me know. … I appreciate finding the site. It made a big difference in my conversations with Tulane. NPAS employees had no idea what was going on, so once I figured out not to talk to them, I made progress.

“I scheduled an appointment at Tulane Sports Medicine on the Tulane University campus with a doctor who is the husband of a friend. I had already received treatment from a podiatrist, but was looking for different treatment options for a painful case of tarsal tunnel syndrome. After x-rays, I met with the doctor. I was given ankle braces and exercises and told to come back in about 12 weeks.

“I began receiving bills for this visit. There were two doctors who sent separate bills to my insurance company, then I paid the bills for the remainder. I received a bill from NPAS, which handles billing for Tulane Hospital. The total was $777.57, which I thought was very high. I asked for an itemized bill, which had two line items – XR ANKLE for $627.27 and OP VISIT LEVEL 1 EST for $150.30. My insurance company was not billed because NPAS had incorrect address and account number information. I called many times to correct this, but NPAS continued to bill incorrectly. It took over 6 months for NPAS to get the bill to my insurance company, who then paid $557.12, leaving me with $220.45 owed.

“My follow-up visit was at the same location. I spent about 15 minutes with the doctor. I received the bill shortly after in the amount of the copay. About a week later, I received a bill from NPAS that again had not been sent to insurance first. The bill had no explanation for the $153.31 amount owed. (The doctor had already billed.) I called NPAS for an explanation, but they didn’t know. They said it was for emergency room service, then said that was incorrect, and had several other explanations that I didn’t understand. I corrected the insurance address information with them again and then called Tulane directly. I spoke with someone in billing who said the charge was a facility fee. I asked for clarification about the fee, but the billing person just said they would send the charge up for review. I took another look at the bill from my initial appointment, and asked if the $150.30 charge was also a facility fee added to the x-ray total. I asked that it be reviewed also.

“I did some internet research and found this blog about facility fees. It gave me confidence to continue to question the $300.00 I was being unfairly forced to pay.

“After about a month, I called Tulane directly again. I asked for a very specific explanation of what the facility fee is and exactly what I received for that service. I kept asking the questions over and over again until the billing person told me that it was not a payable code. I asked if that meant the charges were a mistake. He said that they were not a mistake, but that the charge would have to go up for review. He said there would be an answer in 7-10 days.

“I called again in 10 days. Both facility fees had been dropped completely. I was assured that there was a $0 balance on both bills. I believe that most people get so frustrated with this process that they give up and pay the bills. Persistence is key. It is unfortunate and frustrating, but keep asking questions until an answer makes sense.”