Who gets paid what: The ABC’s of health care pricing 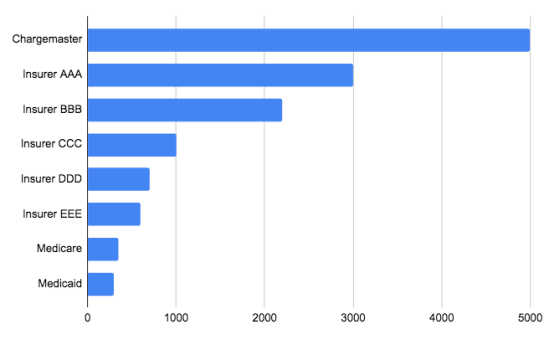 Pricing is byzantine in the U.S. health care system. For any given procedure or item at any given hospital or clinic, there may be a dozen prices or more.

Why? We have what’s called a third-party payer system — many bills are paid not by the patient (the recipient of the service or medication) but by an insurer.

The presence of third parties complicates the system: contracts for payments, negotiated  deals, no coordination of pricing, active information-blocking and third-party intermediaries make for a grand mess — not to mention the fact that they all need to make money, and some have motives that are more or less pristine. But a few things are very simple.

Here’s how it works

Let’s take one procedure: An MRI in a hospital. Look at the chart at the top. It’s a representation of the situation, with notional numbers.

So if no one pays the Chargemaster rate, what is it doing there? Well, the insurance companies negotiate what they will pay for that MRI and thousands of other procedures with each hospital, doctor, lab or clinic. These payment contracts are complicated, and full of surprises. Basically, the insurer says, “You want $5,000 for that MRI? Silly you. I’ll give you $1,200.” The hospital asks for more money, and ultimately they settle on an acceptable price. (This example is vastly oversimplified.)

That negotiated price is never made public. In fact, most contracts have gag clauses saying that neither party can reveal the price — because the hospital doesn’t want Insurer AAA to know it’s accepting $500 from another insurer and asking for $1,200 from another. Neither does the insurer want the other hospitals to know it’s paying $1,200 to one hospital and $500 to another. Here’s more than you want to know about contracting, including gag clauses, in a paper by Jaime King and co-authors from the University of California, Hastings College of the Law.

The insurers will sell their wares based on superior negotiating strength, among other things: “We have Fantastic Hospital in our network, and we have negotiated a 65 percent discount off sticker price — while our competitors have only a 60 percent discount.” Never mind the fact that the Chargemaster prices are wildly inflated.

Payments via Medicaid, the state-federal program for low-income people vary by state, but are generally the lowest payments. Just above that is usually the Medicare rate. Medicare rates are fixed by federal regulation over 70 geographic areas nationwide, and for thousands of medical billing codes, under the Healthcare Common Procedure Coding System, or HCPCS. More about those rates can be found here at the Centers for Medicare and Medicaid Services site. Here’s some more information about Medicare vs. Medicaid in a piece from Healthcare Dive.

To complicate matters further, the Super Blue Premium Gold PPO might pay differently than the Super Blue Premium Platinum PPO — and different employers might have different deals with Super Blue depending on administrative fees (some call them kickbacks), size of the group, how competitive the sale was (“OMG, Acme Industries is going to leave if we don’t give them a better deal!”) and how willing the employer is to stick employees with a higher deductible, higher co-insurance and the like. There are other factors too numerous to mention. It’s a jungle out there.

If a hospital has a rate for cash paid by a self-pay patient, without insurance involved, it is generally less than the Chargemaster rate and more than the Medicaid rate.

How do we get our prices?

We call and ask for the cash or self-pay rate, which an uninsured person would pay.

Sometimes the hospital or doctor gives us the Chargemaster rate, essentially the sticker price.

But in most cases in our survey when we confirm “yes, we want the cash rate, for an uninsured person,” the hospital or doc will give us a discounted price — sometimes significantly discounted.

Note: In 2011, when we first started asking, the cash rate was not consistently offered. Now, more and more places have a cash rate that is significantly discounted. But you have to ask the question right. You might also have to call several times to get the right answer.

You might also call the same hospital four times and get four different answers. This has happened to us. That’s why we suggest taking notes, names and numbers — and asking for a price quote in writing. That can serve as something of a guarantee, in case you need to argue on the back end.

If you are looking for a cash price, and they give you a number with lots of zeroes, you can say “I’m looking for the cash price — that’s right, for someone without insurance.”

Oh, yes, and the bundles

As if it wasn’t complicated enough, there are pricing strategies based on bundles. The bundle for a colonoscopy, for example, might include might include fees for the doctor, the lab tests and the anesthesiologist. Often there is also a facility fee, for the facility where the procedure is performed. (As opposed to doing it in the parking lot, for example.) Some don’t have a facility fee.

The bundled rate goes something like this: The insurer tells the hospital, “We pay this much for a full episode of care for a urinary tract infection, from beginning to end.” This includes medication, hospitalization, doctor’s fees, IV, the whole episode. The bundle supposedly discourages the unbundled pricing strategy, in which the hospital marks every single constituent part at the rack rate and sends for payment.

The theory is that bundling will save money. We haven’t seen any numbers confirming that.  Here’s a deep dive on bundling from the New England Journal of Medicine.

Bundling is used also for things like hip replacements and other surgical experiences. Here’s one such case I wrote about, with approximately 18 jillion items on the bill, but an apparently “bundled” rate that does not enumerate everything from the payer.

This is crazy. Whose fault is this anyway?

People tend to want to find someone to blame for this system — the insurers, the hospitals, big Pharma, pharmacy benefit managers. Our opinion: The system is the villain.

There is lots of guilt to spread around. Think of legislators, who theoretically have the power to make change — but who are dependent on campaign contributions from health care industry players. Or regulators: Couldn’t they do a better job of protecting us? Well, there’s a revolving door between industry and government. Also let’s not forget that some think tanks generate research supporting the status quo — think tanks that have former regulators, legislators and government officials on their staffs and boards.

The electronic medical records companies — Epic, Cerner and others — are hugely profitable.  Wall Street makes a ton of money managing investments for health care players, and also generating bond revenue for them. There is an insanely active convention circuit in health care. There are middlemen to the middlemen in this industry —  consultants on “revenue cycle management,” for example.

Please also don’t lose sight of the fact that the lobbying industry for health care makes the military lobby look like a small-town church group (except no one brought a casserole).

There is plenty of fraud, despite all the regulation — and that fraud is added  to your bill.

Our system makes tons of money for tons of people. It is an engine for economic growth, adding jobs at a rate not seen in other industries. So yes, the system is built to work this way.

And about getting reimbursed

Among the other strange points in this system is the term “reimbursed,” which is used for payments in health care. It makes the act of getting paid seem like a holy and sacred ritual, when it’s actually, well, getting paid.

I’ll let Uwe E. Reinhardt, the late great Princeton health economist, explain. This is from a piece he wrote for The New York Times.

“Organizations that are paid for the goods and services they deliver project the total future revenue implicit in expected future payments and then work back from that projection to determine what operating expenses and capital budgets can be supported with that revenue. Their executives do not lament that ‘our payers reimburse us only 90 cents on the dollar,’ by which they would mean ‘costs.’ Instead, they adjust their costs to the projected payments.

“By contrast, organizations that are reimbursed for their services add up whatever expenses they incur and then expect to be made whole for those expenses, usually with a profit margin. Military contractors on cost-plus contracts, for example, think and operate this way. …

“In health care, the word ‘reimbursement’ became popular when Medicare literally did reimburse each American hospital retrospectively for its full, documented cost of treating Medicare patients, including an allowance for allocated overhead and depreciation of plant and equipment. There was a Section 223 that ruled out certain questionable costs for reimbursement; but by and large each hospital was assured that whatever costs it could document it had incurred for Medicare patients would be reimbursed.

The entire piece is worth reading, as is pretty much anything Reinhardt wrote.

We collect cash prices. But why?

Why would anyone care about a cash or self-pay price? Many people are insured, and so the cash price is irrelevant, right?

First, not everyone is insured. And not all providers are in network.

Also, with rising deductibles and rising coinsurance, much more of the price is being paid by insured people.

Also, if you’re responsible for co-insurance of, say, 20 percent on a procedure, you might want to know whether you’re paying 20 percent of $300 or 20 percent of $6,000. (Depending on the insurance plan’s language, you might be paying a percentage of the sticker price rather than of the negotiated price.)

We’ve heard of people on a high-deductible plan who routinely ask to pay the cash rate instead of the negotiated rate. Here’s one example of an MRI. One person who responded to our California PriceCheck survey wrote: “I was told procedure would be 1850. I have a 7500 deductaible[sic]. So I talked to the office mgr who said if I paid upfront and agreed not to report the procedure to Blue Cross, that it would be $580.”

Of course, if you haven’t met your deductible, you may be paying full freight, even perhaps the Chargemaster price. That’s right: Increasingly, insured people are paying the Chargemaster price. Some of them might prefer to pay a lower, cash or self-pay rate. Here’s a blog post about that, with links to some other posts. Here’s a post about people paying cash for health care, even if they’re insured.

An example of co-insurance

There are a number of reasons that people might be interested in the cash or self-pay price, including the question of whether their insurance premiums are giving them access to the highest rate, rather than the lowest, until they have met their deductible.

Also, in our crowdsourced database, we invite you and others to tell us what your insurance company is paying, and what you paid out of pocket.